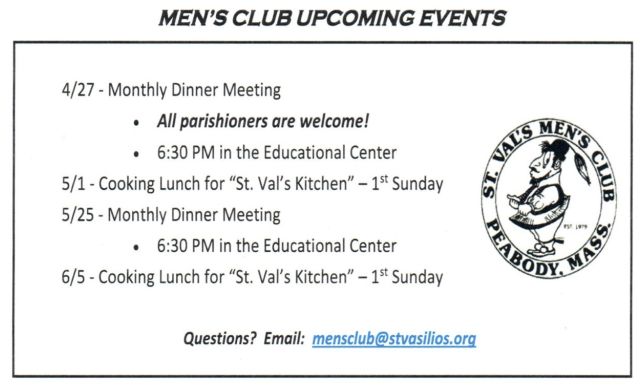 It all began when eight men working in the kitchen during the 1978 Saint Vasilios Church festival decided they would try to organize a club in order to create camaraderie and a social setting for the male parishioners of the saint Vasilios Church. Following the festival, these original members held the first organizational meeting of the group in the church parlor room and selected Orestes (‘Rusty”) Tsaltas as the group’s first leader.

The group decided to hold monthly meetings in the parlor room and the original organizers resolved to cook for those who attended the meetings. After several meetings the organizers decided a monthly speaker or presentation would keep the meetings interesting as well as allow the club to attract new members. The group’s numbers slowly increased over the next several months, the club created bylaws and elected its first group of officers.

As membership continued to increase, the club outgrew the confines of the parlor room and moved to the old Greek school. Cooking at the church for the growing numbers of members also became too difficult and the executive board decided that the monthly meetings should be moved to a local restaurant. The board did decide, however, that they would continue to cook for the Christmas Party held in the Church Educational Center for all members and their wives. The group held the first St. Val’s Men’s Club Christmas part in 1980 and began a tradition that continues to this day.

Several years after the creation of the club, the Executive Board agreed to assume the responsibility for a golf tournament fundraiser with the promise that all funds raised future tournaments would benefit the youth of Saint Vasilios Church. Now in its 39th year, the Club’s annual golf tournament remain its largest fund raising event.

Today St. Val’s Men’s Club boasts a membership in excess of 290 members. Its monthly dinner meeting held on the last Wednesday of the month regularly attracts over 60 members and continues to feature entertaining and informative speakers. Past speakers include doctors, judges, professional athletes, lawyers and authors.  The speaker series also created a tradition of attracting import and notable political figures which in include Mayors and Congressman from the surrounding areas.

The hard work and dedication of its members over the past 39 years has resulted in the Club donating over $500,000.00 to both youth and capital programs of the saint Vasilios Church.