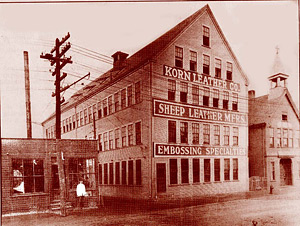 Although St. Vasilios Church would not hold its first organizational meeting or receive its charter for nine more years, it might reasonably trace its beginning to the year 1897. It was then that two brothers, Dimitrios and George Adrianos, immigrants from Sparta, Greece, arrived in Peabody from Lowell, Massachusetts, and became the first Greek residents of the city.

Attracted by the leather industry, which was labor intensive but required few language skills, more immigrants quickly followed, and by 1905 over 500 Hellenes resided in Peabody and the surrounding communities of Salem, Beverly and Danvers. The majority of those arriving were single men, who came to this area intending to work in its leather tanneries, save money and then return to their homeland. There were only 16 families in total among their growing numbers.

Although there were churches in Lowell and Boston, traveling distances made it difficult for these churches to meet the spiritual needs of the local immigrant community. In 1905 the Greek immigrants therefore decided to establish their own church and held a fund-raising dance in the auditorium of Peabody Town Hall. Over 700 Hellenes attended the dance and with proceeds from this event, as well as the personal donations of individual supporters, a total of $1,800 was accumulated.

After purchasing their building, this tireless group proceeded to transform it into a church. On January 1, 1906, the feast day of St. Vasilios, the great hierarch and father of Greek letters, the Rev. Fr. George Sakallarios celebrated the first liturgy at the wooden church. For this reason, the assembled faithful unanimously decided to name their new parish after St. Vasilios.

Shortly thereafter, the official founding of the parish was marked on February 23, 1906, when the Secretary of State of the Commonwealth granted a charter to the Hellenic Orthodox Society of Salem and Peabody. The stated purpose of the society was "the establishment and maintenance of the public worship of God, in accordance with the principles and doctrines of the Hellenic Orthodox Church." The petitioners and signers of the charter were: Peter Stasinopoulos, Speros Kallelis, Theodore Laskaris, Iakovos Perotis, Speros Calliris and Gregory Peralis.

As the Rev. Fr. George Economides observes in his early history of the parish, "The new church quickly became the heart and center of the religious, social and ethnic life of the Greek immigrant community." Building upon the enthusiasm of its members, the newly founded community remained determined and ambitious. In January of 1909 a steeple, adorned with a gilded cross and bell, was added to the church. Although St. Vasilios did not look like a Byzantine structure, it nevertheless looked like a church. In April of that same year, through much work and sacrifice, the mortgage that had secured the property only three years earlier was paid in full. The people of St. Vasilios Greek Orthodox Church had reached a historic milestone in their history. They had established a church and acquired a house of worship that was entirely their own and free of debt.

From its inception the community continued to grow and prosper. This growth was fueled, at least in part, by outside influences. The economies of Greece and the Balkan nations were desperate while the North Shore of Boston was being transformed into the leather and shoe manufacturing capital of the world. The need for workers in these growing industries lured increasing numbers of immigrants from Greece to Peabody and its surrounding communities. By 1912, 2200 Greek immigrants had settled into Peabody and 800 in the neighboring city of Salem. In addition, the community began to experience a growth in families as women also began to immigrate to America and marry men who already resided here.

Although a place of worship was established, these new residents of Peabody had other concerns. With their spiritual and religious needs satisfied, they thought it important to also bring Greek culture to their adopted homeland. Although they were eager to assimilate into this new society, they were equally determined to preserve their culture, heritage and sense of identity for their American-born children.

To achieve this goal, they established a Greek-American School at St. Vasilios Church on November 17, 1912. Located on the second floor of the Walnut Street church building, it was the sixth Greek School in the United States. Because the parents of the students wanted to preserve the culture and language of their previous homeland as well as ensure the assimilation of their children in their new country, the pupils were taught both Greek and English. When it opened, 40 students were enrolled, and the founding teachers of the new school were Helen Decoulos and Florence Lord. Miss Decoulos was a member of the parish, and Miss Lord was a resident of Peabody who spoke both Greek and English. Certified by the Massachusetts State Board of Education, the school functioned five days per week, for seven hours a day. True to its founding principles, the school proudly displayed both the American and Greek flags, as well as portraits of George Washington, Abraham Lincoln, the sages of ancient Greece and the great heroes of the Greek War of Independence.

On February 26, 1913, at 11:15 a.m., fire broke out at the church building. With school in session and 32 students in class, a stove caught fire, and the fire quickly spread through the church. The teachers, according to the Salem News, “acted with rare presence of mind, calmed the little ones, and piloted them over an outside stairway without panic and without pushing or shoving.” As a result of the fire, the parishioners had to temporarily hold services in the Methodist Church on Washington Street, which had graciously extended its hospitality. 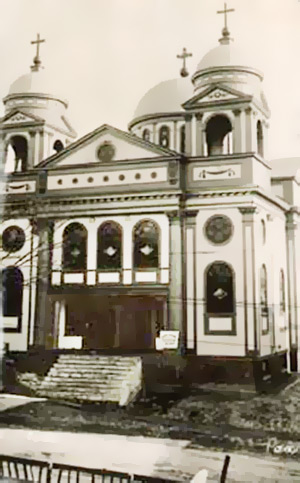 In 1913, only seven years after establishing a Greek Orthodox church and school, the growing community had outgrown its facility. Realizing that provision would need to be made for continued growth in the parish, land at 7 English Street was purchased for $1,500., during the presidency of Peter Stasinopoulos.

In April of 1913, the cornerstone of St. Vasilios Church was laid at a ceremony attended by more than 2,000 people. The small immigrant group that had incorporated its community less than a decade earlier was becoming a force noticed by the non-Greek citizens and the political power structure of Peabody. At the ceremony, the keynote speaker was the Hon. S. Howard Donnell, the first mayor of the newly incorporated city, who spoke of the Hellenic contribution to Western democracy and culture, and remarks were offered by City Councilor William Duggan who spoke of the contributions of the Greek community to the city of Peabody.

The ceremony was followed by three years of intense fund raising as the community sought to acquire the necessary funds to construct the church. In the midst of this activity, the land adjacent to the church property at 5 English Street became available. At what can only be described as a visionary and courageous leap of faith, the community, led by its president, Stavros Voymas, purchased the land in 1915 for $3,000 for the purpose of building a parish school next to the church. This interrupted the fund-raising momentum for building the church itself but nonetheless insured that in future years the church’s cultural and educational goals would be met and its religious and spiritual missions adequately fulfilled.

In the summer of 1915 fund-raising efforts resumed, and the community was able to pay the costs of the two land acquisitions and to accumulate an additional $8,000 toward the new church construction. This effort was led by then Pres. Demetrios Alikiotis and the Rev. Fr. Emilianos Georgoulis and culminated in the signing of a construction contract with the DUPRE & ST. PIERRE Construction Company in the amount of $35,000. The building was secured by a mortgage in the amount of $27,000 from the Salem Savings Bank, and the construction was completed in the winter of 1917. The first liturgy in the new church was celebrated on January 1, 1918, on the feast of the parish patron, St. Vasilios, and exactly 12 years after the first liturgy in Peabody on the same date in 1906.

Although the church had been moved to its new edifice on English Street, the school continued to function at its old location on Walnut Street throughout the years beginning in September of 1917 and ending in June of 1919. At that time the original church building was sold, the school was transformed into an afternoon Greek school and was moved to the Thomas Carroll School. 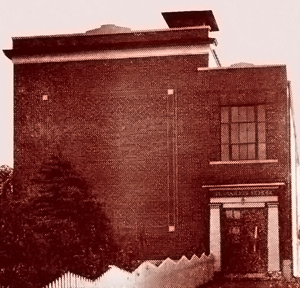 In 1923 a new four-room school was constructed next to the new church at a cost of $24,000, and the church’s educational and religious missions were reunited in a single building complex on English Street. At that time the city of Peabody also rented the facility as an annex to the Thomas Carroll School, an arrangement that continued for a number of years.

During the years 1914-1918 the church was also affected by the terrible events of the First World War. More than 100 young men of the parish, 75 from Peabody and 25 from Salem, served in the armed forces of our nation. Five did not return. One of the five, Gregory Paleologos, was the first soldier from Peabody to die in the conflict. Seeking to acknowledge his heroic sacrifice, the city fathers searched for a suitable memorial. Heeding the entreaties of a group of veterans led by Nicholas Pappas, the city decided in July of 1932 to change the name of English Street to Paleologos Street in his honor.

With the war over, with its new buildings in place and with its continued growth in numbers, one could have expected a long period of continued progress and expansion for St. Vasilios Church. But storm clouds had begun to gather on the horizon. These clouds represented unrelated forces outside the parish which quickly combined into a perfect storm that would affect St. Vasilios in profound ways and would threaten its very existence.