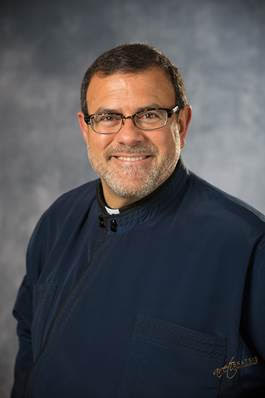 Father Chris was born in Boston and was raised in Salem, MA.  He attended high school at St. John’s Prep in Danvers, MA.  Furthermore, Father is a 1988 graduate of the Holy Cross Greek Orthodox School of Theology in Brookline, MA.  Father Chris was ordained a deacon by Metropolitan Methodios on June 10, 1989 and to the Holy Priesthood on February 18, 1990.

Prior to being assigned to St. Vasilios (St. Basil), Father Chris was completing his fourth year as pastor at the Transfiguration Church in Lowell, MA.  Previously, he has served as pastor for nearly six years at the Annunciation of the Virgin Mary in Woburn, MA and seven years at the Annunciation Church in Newburyport, MA.  Before his service in Newburyport, Father Chris had served for nearly two years as youth direction of the then Diocese of Boston.

In 1981, Father Chris graduated from Clark University with a Bachelor of Arts degree in economics and as a Distinguished Military Graduate of the U.S. Air Force ROTC program.  He then served three years in the Air Force as a Missile Combat Crew Commander at Francis E. Warren Air Force Base in Cheyenne, WY.  He was discharged August 15, 1984 as a 1st Lieutenant.

Father Chris is married to the former Claire Theodore of Euclid, OH and they have one son, Peter.

One of the many St Vasilios ministries includes their generous commitment to helping others who are less fortunate by cooking for the Haven from Hunger, a shelter that feeds the hungry. Learn more »